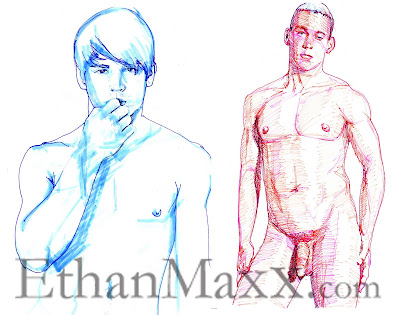 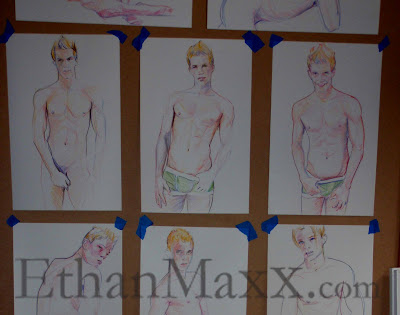 this is work on the wall of my studio for my book!!!
I recently had an e-mail asking….. Is your published artwork available in 11 x 17 prints?????
And I've also had a few e-mails complaining that, artwork I'm using to advertise my website is not available on my website. Right now I am working on the first Ethan Maxx coffee-table art book (I am very excited about it) unfortunately, everything I'm drawing is first considered for my book, I will have a new gallery up in January 2009 but for now my focus is on the book. But to answer your question. Anything that you seen published or that I'm using for advertising is available in 11 x 17 prints for the same price that is available on my web site. So… yes, Virginia, I'm a whore! (In the biblical sense) just e-mail me a description of the image you're interested in,and I'll e-mail you a thumbnail to make sure we are talking about the same artwork.

What is gay face? 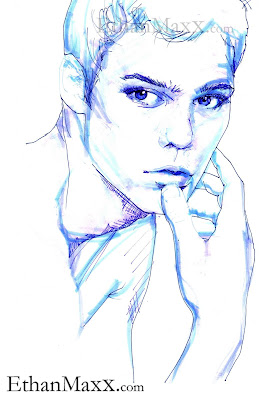 The other day, I had this model come over. I was only half in the mood to do some drawing, but this model I was e-mailing was available now, So I decided to have him over. He got naked right away, had a great body and a cute face. But it was most definitely described as gay face. I wouldn't say he was unattractive. But he had that thing?... Super big lips?... Super big eyes?... What is it that makes gay face?
Oh, and this model. had no intention of posing for me! He laid down, all naked, in my Hawaiian room. And asked “ do you want me hard” to which I replied “if you want to be” so he starts stroking himself, rolling his head back and forth and slightly moaning. (All while I'm supposed to be drawing him) every single body part is moving, I realize I'm not going to get any drawing done. So I stand up, take off my clothes (I'm hard) and I go to him, and start touching all the lines that I wish I could draw, he moans louder. He is lying on his back and stroking himself so I grab his balls, he doesn't let go of his shaft so I assume he wants to keep control of that; that's cool, I extend my index finger into the warm crease of his ass, (I'm not penetrating him) I'm just in that warm area before penetration. This is enough to completely excite me, and I am ready to pop. (I know this is going to sound crazy) but I just had the Hawaiian room redone, all the paint and all the fabrics are all brand-new and I love everything about the room. So….. I tell him I'm ready, but that…. I don't know where to???? And he said “do it on me” even hotter! I said “ are you sure” as I shot a load all over him. He popped at the same time (I love that)
then he gets up, looks at my half retarded drawing I did of him, because every single body part was moving, and he was stroking himself sexually and I could not focus, and leaves…

So anyway that's my question about gay face.
Ethan­

Forgive me, for I am pissed off!!! 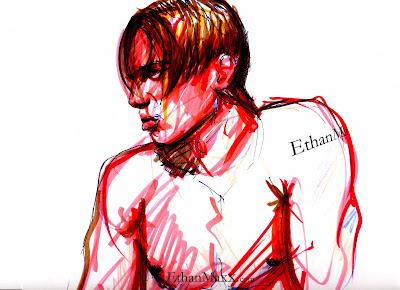 I truly meant to keep my blog up to date. It was a personal goal to make sure every week I would be adding new blogs. Then proposition eight past???????????? I don't really know if I want to get married or not. But I can tell you for sure. I do not want to have rights taken away from me. I have tried writing several blogs between now and November 4, each and everyone was full of hateful words, I decided not to post them. I feel as though I have every right to be a little hateful right now. But I'm going to keep all that internal.
Posted by Ethan Maxx at 5:55 PM No comments: