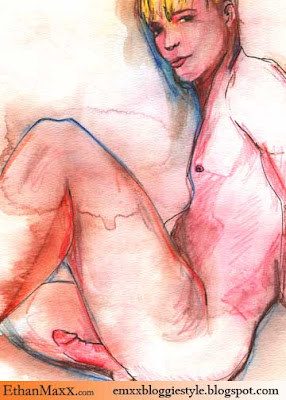 I have been sorting through and trying to organize all my work. I tell people that in the beginning I only drew women, while sorting through some old work I found out that was not true. I came across this watercolor I did (when I was "straight") the model was also "straight"we were just two straight guys siting in a room, I remember when he started his post he wasn't hard, but as I drew he got harder and harder. He was embarrassed and I told him "it happens all the time" just to settle his nerves. What I didn't tell him was that I was in agonizing pain as I grew harder I had nowhere to go so it kept pressing into my zipper ( I didn't want to adjust because I thought he would think I was gay.) We never fooled around, and as we departed he said "we should do this again sometime" I never called him again.