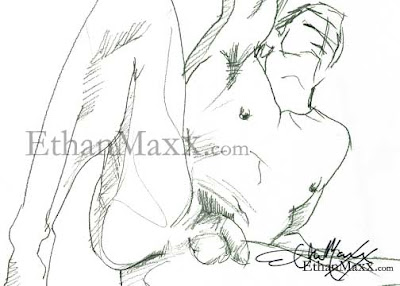 Every so often I'll attend sketching groups. I'm not a huge fan of them, I think they feel cold and somewhat impersonal. Because every pose has a time limit, soon as the pose starts the room falls silent ( except for the sound of pencils on paper) and after about a minute the model who was once excited to be sitting naked in a room of men, starts to realize the pressure of holding a timed pose. You can actually see the sexual energy leave their bodies as an arm or leg starts to shake with the pressure of holding still.

On this day, the group which is normally gay men had the addition of one female. (Sometimes you don't realize how homoerotic the poses are until you're drawing with a girl). The beeping of the timer let us know that it is time for the models break, he asked if he could take a look at what everyone was drawing. Silently and one by one he went around the room examining everyone's work, when he got to the girl he said "interesting.... you're the only one who drew my face.
Posted by Ethan Maxx at 7:25 AM