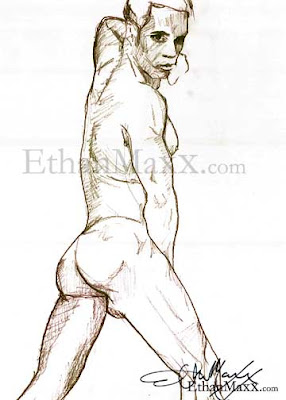 Even though he had the goofy look on his face, I can't say I was complaining. It was a beautiful Southern California afternoon, and I was in the backyard with a gorgeous naked guy ( who was cheesy) but, butt naked. At some point he announced that he needed to take a leak, I told him he could use the house bathroom or just go in the backyard. He went over by the fig tree to do his business, and for the first time that day he was holding a decent pose (I am not now nor have I ever been into "water sports") but he was standing naturally and his body was relaxed. So I told him to hold that pose...... he immediately put his arm on the tree and widened his stance ( ruining what was natural) honestly who pees like that?
Posted by Ethan Maxx at 7:44 AM